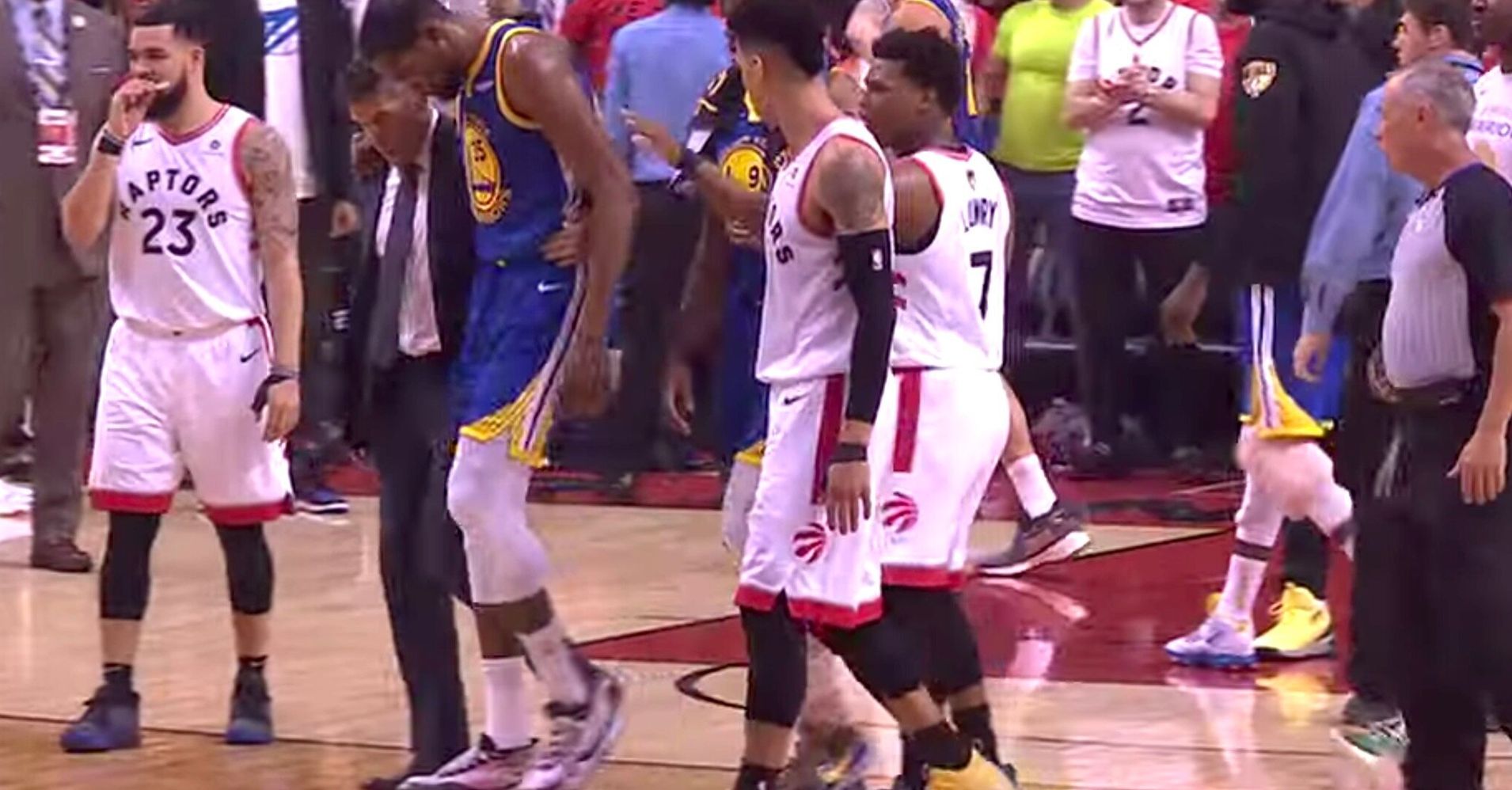 Golden Star Warriors star Kevin Durant returned from an injury on Monday night, but it didn’t last long during Game 5 of the NBA Finals at the Toronto Raptors’ arena.

Durant, recovering from a calf injury, scored 11 points before reinjuring the calf early in the second quarter. As he limped off the court, Toronto fans rose up to jeer… a scene that angered athletes on both sides.

Warriors players shook their heads and pointed at the crowd, and then something unexpected happened in the heat of a finals game: The Raptors surrounded Durant and helped to escort him off the court, gesturing to their own fans to cut it out:

Some fans cheered as Kevin Durant exited with an injury, and the players weren’t having it

Toronto’s Kyle Lowry held up his hands and appeared to shout something to the fans:

shoutout to Kyle Lowry for trying to stop fans from celebrating the Kevin Durant injury pic.twitter.com/ecaYS4bZE2

What a photo from our @jcfphotog. Serge Ibaka telling his home crowd to stop cheering Kevin Durant’s injury as Durant winces in pain walking off the court. pic.twitter.com/yowIPGuK9R

Even Toronto superfan ― and noted heckler ― Drake appeared anguished by the injury and tried to console Durant:

Drake consoled Kevin Durant as he walked off in the second quarter. pic.twitter.com/05ZpHdL49l

Eventually, fans got the message as “K.D.” chants erupted in the Scotiabank Arena in Toronto in support of Durant, who left the arena on crutches and is schedule to get an MRI on Tuesday, according to the team.

Fans on social media praised the Raptors for defending their fallen rival… and called out those who cheered the injury:

Kyle Lowry is a champion at dealing with bad fan behavior https://t.co/m9FJCJUPA6

i hate the warriors as much as the next guy, but the raptor fans hella sad for cheering at KD injury. @realDonaldTrump time for some new tariffs or sumn

Credit to Serge Ibaka and Herbie Kuhn for telling the crowed not to cheer, as well as those in the crowd who did so. Cheers turned to respectful applause, and a brief KD chant.

We apologize. At least I do. That was shitty. 🇨🇦

Such an awful look for Toronto after the week-long narrative of a classy fan base. https://t.co/nve1xpVfIr

Kudos to the players. Major boos to the fans who cheered when Durant went down and waved goodbye to him. So disrespectful.

This reaffirms my love for players like Lowry. https://t.co/lkbw6XkLHY

Patrick Mahomes Hugged Dad In Super Bowl Euphoria And There Were...

Brad Stevens Is The Last Person To Blame For The Celtics’...